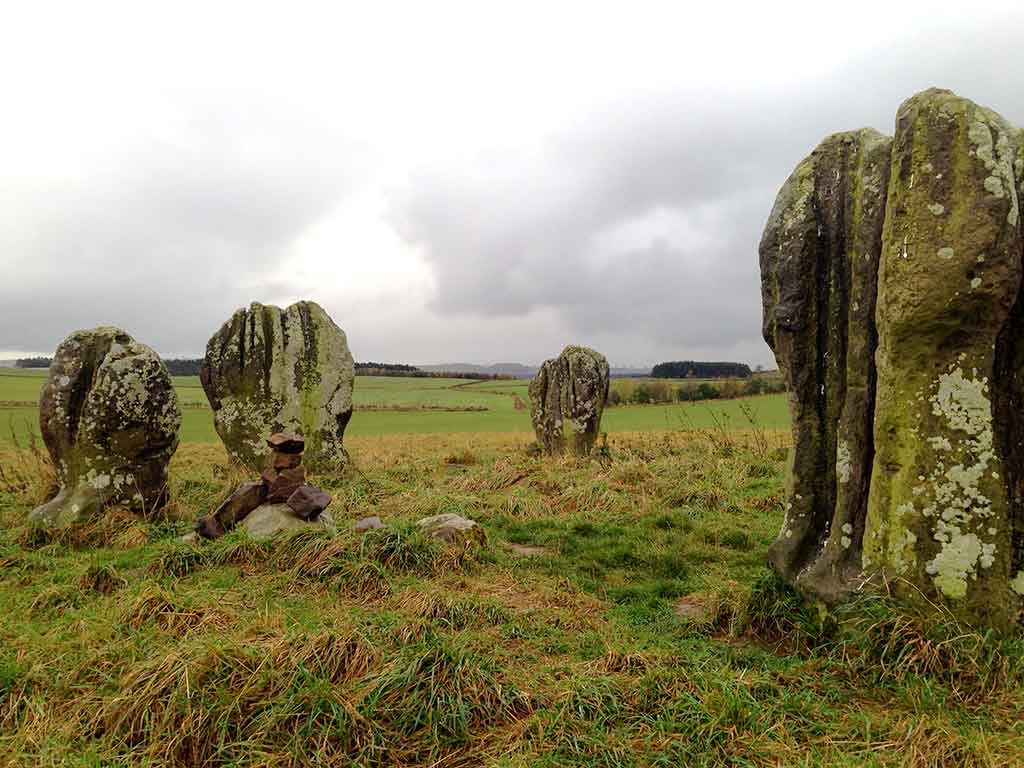 For a spine-tingling trip back in time, a visit to the stone circle of Duddo is not to be missed.

Located just 20 minutes’ drive from Homildon Cottage to the north of Ford & Etal, Duddo Five Stones is Northumberland’s answer to Stonehenge (albeit on a slightly smaller scale!)

After crossing a field along a mud track, the Neolithic monument appears on the horizon ahead of you, atop a small mound. The view takes in not only the Cheviots but also the Eildon Hills in nearby Scotland.

The prominent local archaeologist Roger Miket describes the circle as, “Undoubtedly the most complete and dramatically situated in Northumberland”.

Certainly the five standing stones are striking to see. Fairly flat and tapering toward the ground, the soft sandstone monoliths have been inscribed with deep vertical grooves from the centuries of Northumbrian rain and wind. The largest is over 2m high. There once were six stones (as recorded in 1811) but there is now a gap where the sixth stone stood.

In 1852 the antiquarian and topographer Canon James Raine investigated the stones, “On an eminence in the middle of a field a mile north west of Duddo stands a time and weather worn memorial of the Druidical period… The situation of this hillock is of a peculiar nature; it rises as it were, in the middle of a large natural basin two miles in diameter and might have been seen at one and the same time by thousands upon thousands of assembled devotees.”

A late 19th Century excavation of the site discovered a central pit “six to eight feet in diameter” with charcoal and burnt fragments of bone, suggesting the circle may perhaps have been used for cremations. By this time, only four stones were still standing although one of missing two was later discovered intact and re-erected.

It is a mysterious and almost eerie feeling to stand at the centre of this circle of stones placed so long ago by our ancestors. No one knows the exact age of the stone circle, but it dates back at least some 4,500 years. You can almost picture those humans from long ago performing their sacred rites in this most wild and lonely of landscapes.

Getting to the Duddo Stones

Visiting the Duddo Stones is free. Approaching Duddo from the south, turn left and follow the road until you see a sign beside a field gate on the right-hand side of the road. Park here to walk about 1km along a permissive path.