Wooler is a pleasant little country town of some local importance, nestling at the foot of the Cheviot Hills… It consists of one straggling street, with some minor offshoots, and serves as a market centre for the district … But still Wooler, now as formerly, is a refuge from the hurry and scurry of modern life

A History of Northumberland, KH Victors, 1922

What was true in 1922 remains largely true today: Wooler feels a refuge from the hurry and scurry of modern life. This market town serves the wider area of Glendale – some 250 square miles of Northumberland countryside with a mere 6,000 inhabitants.

Passing traffic is carried on the A697, bypassing the heart of the town., but the High Street is very much alive though with its range of traditional shops. Aside from the Co-op supermarket, there is an absence of chain shops with the street remaining occupied by the likes of Glendale Pharmacy, TR Johnson butchers, Glendale Paints and Trotters bakery. The newsagents retains its sign reading “Brand” after William Brand who opened the shop in 1842 at the start of a 133 year family connection to the shop.

The market place with bus station to one side has long been a focus of the town. One mark of this is the clustering of some of the town’s traditional pubs and hotels around this point. Historically, Wooler’s inns were bolstered by its role as a coaching post on the route between England and Scotland as well as Wooler’s capacity as a market town. In 1855, Whellan’s Directory of Northumberland lists no fewer than 13 inns in Wooler. Although several of these were destroyed in the disastrous fire of February 1863, many remain such as the Black Bull, the Angel and the former coaching inn The Tankerville Arms.

The Cheviot Hills have been a draw for walkers and campers for more than a hundred years. In 1887 Wooler gained a rail connection that allowed easier access, earning it the title of “Gateway to the Cheviots”. This North Eastern Railway branch line from Alnwick to Cornhill encouraged day trippers as well as those lingering a little longer, and charabanc tours added to numbers further. Passenger traffic was stopped in the 1930s and after the track was badly flooded in 1948 the route declined further – divided into two and parts were closed. The Wooler to Cornhill section remained open until sadly the remainder of the railway line was axed in 1965, like so many others that are sorely missed today.

There is much evidence of settlements in the area dating back to the Bronze Age, and one of these may well have existed on the current site. Stones etched with the mysterious cup and ring marks are found in the local hills – perhaps a form of prehistoric art?

Certainly an interesting archaeological find lies just up the road, near Yeavering Bell. Here is the site of Ad Gefrin, the palace of the Anglo-Saxon kings in Northumbria, as recorded by 6th century scholar the Venerable Bede. The palace was formed of large timber halls with their foundations in turn cutting through the remains of religious monuments and the cemetery of Neolithic and Early Bronze Age people living here some 3000 years earlier, and may have drawn on this as a traditional place of local assembly.

Wooler is not mentioned in the Domesday book of 1086, no doubt because the Normans took some time to consolidate their hold on northern England after the Conquest.

In spite of the apparent ovine connection, the name Wooler derives in fact most likely from “wella ofa”, Old English for “stream bank”, in reference to Wooler Water. As so often with Old English, a number of spellings are recorded including Wulloure in 1187 and Welloure in 1196.

Norman attention eventually turned to Northumberland which was carved up into 21 feudal baronies. In 1107, the first baron of Wooler was appointed by Henry I, a Robert de Muschamp. He is thought to be responsible for creating a defensive castle mound, on the east side of Church Street overlooking Wooler Water. Green Castle, just to the west of Wooler, is another mound topped with a defensive ringwork. According to the excellent “Northumberland Extensive Urban Survey Project: Wooler” report, “the chronological and political relationship between these two sites is not known”.

A licence for a market to be held every Thursday was granted in 1199. This laid the basis for a market for the next several hundred years that made Wooler a key commercial hub to the surrounding agricultural hinterland. 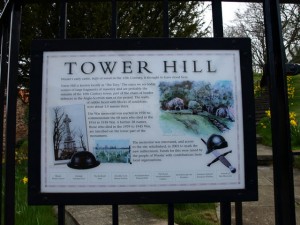 From the thirteen to sixteenth century, Scotland and England were frequently at war, seeing the devastation of the livelihood of local people by the contending armies.

The battles at Homildon Hill (now Humbleton Hill) in 1402 and Flodden in 1513 were historically significant. The derelict Surrey House (on the A697) gained its name from the stay of the Earl of Surrey on the night before the Battle of Flodden. It is supposedly from here that he wrote to James IV reproaching him for not yet giving battle. Perhaps even more important locally were the Scottish raids of 1340 and 1409 as these caused great destruction.

The mound that may have held a 12th century defence for Baron Muschamp was certainly the site for building defences in the 16th century. Wooler Tower was built sometime in the early 1500s in response to the threat of Scottish raids.

Lord Dacre described Wooler as a place of particular danger and as “the outermost town of the realm”.

Keep a watch for raids day and night…

At this time, Wooler was considered of greater strategic importance than the castle at Chillingham and the men of the town were expected to assist in the defence of the township. In 1534, 10 men had to keep a watch day and night, while a survey of the Borders in 1541 described the Wooler Tower as a “mervelous convenyent place for the defence of the country thereabout” and as still “standing strongly”.

Uncertainty and tension meant that some communities sought security through their own strength and cunning rather than through loyalty to the law of a distant monarch. Because of its position in The Borders, Wooler and the surrounding area saw raids by the Reivers from the late 13th century, continuing for some 400 years. These raiders could be from Scottish or English families, and they raided the entire border country without regard to their victims’ nationality. Notable features in this region, such as peel towers, originated as a result of border “reiving” as inhabitants of the Borders had to live in a state of constant alert and built fortified houses for self-protection. A unique set of “Border Laws” grew up to manage this restive area. The Union of the Crowns in 1603 saw the beginning of the end for the Reivers, as James I (James VI of Scotland) cracked down on their activities.

Agriculture saw Wooler prosper as a market town, with the population reaching nearly two thousand by 1851 – much the same size as today. An annual fair and market took place around the first week of May, with farm-workers and their families looking to be hired by farmers and estate managers for the coming year. As part of the deal, a farm labourer (or hind) were expected to provide a woman (bondager) to work on the farm too. Until the mid 19th century this bondager was paid by the hind though later they were hired directly by the farmer on a day labour basis.

This event, “The Hirings”, was centred on the now demolished fountain in Wooler market square. It was followed a week later by “The Flitting” when farm-workers’ families moved their household possessions to their new farm. In his 1909 book, “A Corner in the North”, HA Neville described this Flitting: “to see our roads from morning to evening thronged with carts piled with the bedding of a large portion of our population, is a strange sight even if you have seen it year after year for a long time. This practice continued into the twentieth century, until the Second World War.

From the late 19th century, this “Gateway to the Cheviots” drew walkers, hikers and day trippers. Many also visited for the supposed health benefits of the clean air and pure waters. Visitors included:

The railway stopped carrying passengers in 1930, apart from a brief respite during World War Two to serve RAF Milfield. However the waiting room was put to good use, serving as a Youth Hostel from 1936 – with separate accommodation for men and women on opposite sides of the tracks.

The town today maintains many of its historic strengths with a variety of shops along the High Street and elsewhere. Read more about Wooler’s shops and restaurants.

There is an tourist information centre and shop at the Cheviot Centre which also hosts the local library. The annual Glendale Show draws thousands of visitors with its races, fair and many stalls of food and crafts. The Chevy Chase is annual 20 mile race which takes place early in July while the Wooler Wheel hold a series of cycling events through North Northumberland.

Being a cottage near Wooler puts all this on our doorstep. The most direct walk to Wooler from Homildon Cottage takes around 15 minutes. An alternative, more circular route along part of St Cuthbert’s Way can be walked in an hour.

Find out more about places of interest in and around Wooler.

This is the briefest of outlines as an introduction to Wooler’s rich history. Being comparatively new to the area, there’s no doubt lots to learn: let us know what we’ve left out. Or read more in some of the excellent books that cover this topic in much more depth. Brands on Wooler High Street has a good selection of local histories and more. Some good starting points are:

A short introduction to a turbulent history of raiding: Tales of the Border Reivers, by Beryl Homes

Out of print but still available second-hand is the short but interesting Wooler, Ford, Chillingham & The Cheviots, by Frank Graham (1976)

Read more about Ad Gefrin and the archaeology of the northern Cheviots and the Northumberland National Park area online at www.gefrin.com