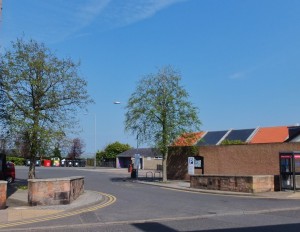 Wooler bus station is located in the heart of town, off the High Street by the Black Bull Inn. Some buses stop elsewhere around and about Wooler: check timetables or ask the driver for details.

Although linked timetables were correct at time of writing, we advise checking before travel using the Traveline online journey planner or direct with operators: Border Buses (267, 464), PCL Travel (470, 473) or Glen Valley Tours (266, 710).

Sadly the train line to Wooler closed many decades ago. In fact Wooler station last accepted passengers back in 1930!

From Berwick you can travel to Wooler on one of the above buses, or get a local taxi (pre-book from the options below and expect to pay about £30 for the half hour trip). Car rental is another option, or you can cycle from Berwick to Wooler in about 1.5 hours. East Coast and Cross Country inter-city trains carry bikes for free but you should reserve a space in advance.

Some trains serve Alnmouth instead which is another option, albeit further from Wooler. The closest station to Wooler, Chathill, is small and only served by a very limited commuter service from Newcastle. County town Morpeth is also served by a train service, but Berwick-upon-Tweed station will be the better option for most rail travellers to Wooler. Make sure you plan to “Berwick-upon-Tweed [BWK]” and not the similarly named Berwick in Sussex.

“Gateway to the Cheviots”

Wooler sits close to the vast, empty expanse of the Northumberland National Park, and is justly known as the “Gateway to the Cheviots”. These hills have been tempting walkers and campers from far and wide to travel to Wooler for more than a hundred years. Wooler’s history is fascinating and for many it also remains “a refuge from the hurry and scurry of modern life”.